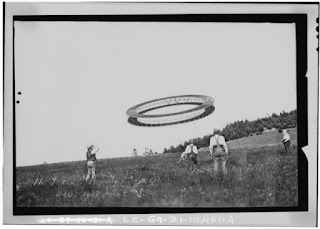 In addition to developing the telephone, Alexander Graham Bell did extensive research in aerodynamics. He experimented with a tetrahedral structure for kites to lessen the weight-to-surface ratio to enable humans to fly.


Bell began his experiments with tetrahedral box kites in 1898, eventually developing elaborate structures comprised of multiple compound tetrahedral kites covered in maroon silk, constructed with the aim of being to carry a human through the air. Named Cygnet I, II, and III (for they took off from water) these enormous tetrahedral beings were flown both unmanned and manned during a five year period from 1907 until 1912.

You can see a gallery of pictures taken during that time at the Public Domain Review.
Posted by nacktman at 12:06 AM