In 1919, a New York advertising agency told 18-year-old Lillian Eichler that they did not hire women, or Jews, as ad writers. But her writing impressed the company officials so much that they changed their minds and hired her. She produced many innovative ads over the next few years. At the same time, Doubleday issued an etiquette book by Eleanor Holt, which was stuffy and old-fashioned, and did not sell too well. They needed help advertising it. 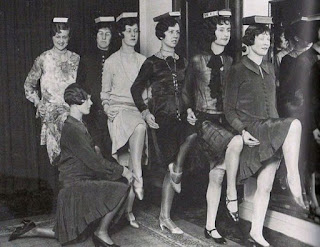 Lillian produced a campaign showing an agitated guest spilling a cup of coffee over the table cloth, with the caption ‘Has This Ever Happened To You?’ The ad swiftly sold the 1,000 copies of Holt’s encyclopedia, but they were just as quickly returned, readers finding the tone too old fashioned.
Doubleday hit upon the idea of having this fusty book filled with Victorian social dilemmas, being re-written and modernized. And who better to put a Jazz Age spin, than the copywriting prodigy that had created the ad.
“My mother was asked to rewrite this out of date book to make it more appropriate for the time”, recalls Anita Weinstein, Lillian’s daughter. “She was a very ambitious young woman. She was very proud that she was one of the very few women who would drive over the bridge [from Queens] to work in the city.” Astonishingly for 1922, the young copywriter not only re-wrote the book on etiquette, but dreamt up the ad campaign to sell it as well.

Lillian Eichler's Book of Etiquette was not stuffy, and addressed social manners from the viewpoint of a modern young woman, one like herself, who made her own way in life yet wanted to impress friends and family, bosses, and suitors. The book and several others made her a millionaire. Read the story of Lillian Eichler, and see pages from her books at Messy Messy Chic.
Posted by nacktman at 12:13 AM