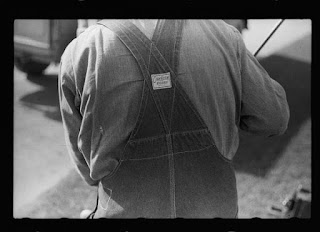 New Zealand farmers hate the invasive weed known as ragwort, as it is poison to horses and cattle. The old method of using sheep and goats to clear it no longer worked during an infestation in the 1930s. Luckily, modern technology provided farmers with a new miracle herbicide that eliminated ragwort. The problem was that it was new, and that meant it came with unintended consequences, like exploding pants.

One of the earliest cases of exploding pants, and the one most closely associated with the phenomenon, involved a farmer named Richard Buckley, who made the local news after some of his pants exploded in his house. After wearing them to spray the sodium chlorate, he hung them in front of the fire to dry out. Out of nowhere, his trousers exploded with a bang. According to a news report from the day, he was able to snag his now flaming pants and throw them out onto the grass where small explosions continued to erupt in the garment. Buckley was alarmed, but unharmed.
Around the same time, similar reports of spontaneously combusting pants began to appear, and not all of them were as harmless as Buckley’s. One report claimed that a farmer was riding his horse when the friction caused his pants to begin to smolder right there in the saddle. Another pair of pants were hanging out to dry when they suddenly burst into flames. Then there were the unfortunate souls who happened to be wearing their pants when the chemical reaction got started. Some survived with serious burns, while at least a handful of farmers died from the ignitions. One person, referenced in Watson’s paper, died after lighting a match in his electricity-free home, just trying to check on his baby.

Eventually the phenomena was connected with the herbicide, and steps were taken to prevent it from happening. During Pants Week at Atlas Obscura, we get to read the story of New Zealand's exploding pants.
Posted by nacktman at 12:08 AM