How the Horrific 1918 Flu Spread Across America

The flu pandemic of 1918 killed between 50 million and 100 million people across the globe -more than died in World War I combat. But no one took it seriously at the beginning, because it was just flu, and few of the people who contracted it died. That's why it was able to spread so fast and so far. It was called Spanish flu, but it probably originated in the United States. After the fact, the outbreak was traced to Haskell County, Kansas, where many people became sick in January of 1918. The local doctor reported the outbreak, which meant it particularly worried him, since influenza was not a reportable disease. 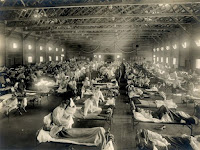 Several Haskell men who had been exposed to influenza went to Camp Funston, in central Kansas. Days later, on March 4, the first soldier known to have influenza reported ill. The huge Army base was training men for combat in World War I, and within two weeks 1,100 soldiers were admitted to the hospital, with thousands more sick in barracks. Thirty-eight died. Then, infected soldiers likely carried influenza from Funston to other Army camps in the States—24 of 36 large camps had outbreaks—sickening tens of thousands, before carrying the disease overseas. Meanwhile, the disease spread into U.S. civilian communities.
The influenza virus mutates rapidly, changing enough that the human immune system has difficulty recognizing and attacking it even from one season to the next. A pandemic occurs when an entirely new and virulent influenza virus, which the immune system has not previously seen, enters the population and spreads worldwide. Ordinary seasonal influenza viruses normally bind only to cells in the upper respiratory tract—the nose and throat—which is why they transmit easily. The 1918 pandemic virus infected cells in the upper respiratory tract, transmitting easily, but also deep in the lungs, damaging tissue and often leading to viral as well as bacterial pneumonias.

The flu ravaged Europe, then abated in July, leading to a false sense that it was over. When it roared back, it was deadlier than ever. The disease was exacerbated in the US, where government officials refused to acknowledge it, fearing it would hinder the war effort. The lack of information only fueled panic. Smithsonian magazine tells us about the spread of the 1918 flu pandemic.
Posted by nacktman at 12:17 AM