On Faux News, percentages don't add up to 100 and, apparently, 'zero tolerance' means unless we get caught.

Yesterday, during FAUX and Friends, the network provided these misleading numbers on a poll about climate change: 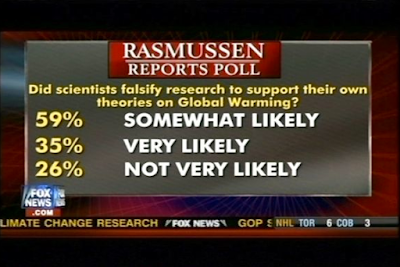 Notice the fuzzy math? This poll adds up to 120%.
Being climate change deniers, the talking heads on Faux and Friends loved those numbers. Media Matters pointed out the error to FAUX, but FAUX denied the mistake.
When confronted with the error, the executive producer of the show, Lauren Patterson, denied any mistake.
120% worth of responses to a poll isn't an error in FAUX world.
And, this was a denial despite the new FAUX "zero tolerance" policy for mistakes.
Media Matter's Ari Rabin-Havt summed it up:

"Lauren Petterson clearly did not watch the segment in question. Host Steve Doocy agreed with Media Matters’ interpretation seeing as he attempted to add up these numbers as they appeared on air and said “so you get 90 – you got a lot of people.” On Faux News, percentages don't add up to 100 and, apparently, 'zero tolerance' means unless we get caught."

FAUX is on a mission.
Silly facts can't get in its way.
FAUX falsified research to support its views.
What else is new.
Posted by nacktman at 12:01 AM