Burglar killed goldfish because he didn’t want any witnesses

Three goldfish were killed by a 16-year-old burglar because he “didn’t want to leave any witnesses”, police have revealed. The teenager was arrested and charged by police with residential burglary and cruelty to animals following the incident in January.

According to Arlington Heights Police, Illinois, the youth – along with a 15- and 17-year-old – broke into a house and stole a games console and 30 games, CD player, 30 DVDs,a BB gun, jewellery and a safe. 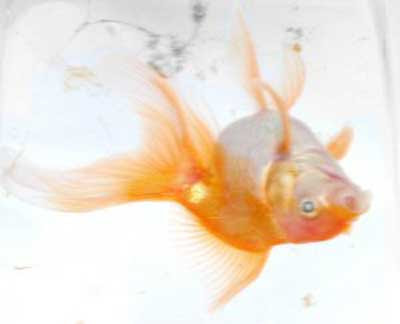 The 16-year-old is then alleged to have poured mustard, ketchup and spices into a tank, killing the fish. The police report says the boy looked at the first tank and said “we can’t leave any witnesses,” before carrying out the pointless act of cruelty.

Sgt. Mike Hernandez of the Arlington Heights Police Department, Illinois, said: “As a matter of fact, it’s a little disturbing.”
Posted by nacktman at 10:12 PM