A French woman, whose coughing fit exposed a pair of surgical forceps left in her stomach five months ago, said she is still waiting for an apology from her doctor. The shocking sight of a metal tip poking out of her belly button last Friday explained the weeks of agony the 31-year-old from Lyon, eastern France - identified only as Anne - had endured following an otherwise successful tummy tuck operation last October.

But far from being sorry about the medical mishap, her surgeon Dr Bernard Dessapt from Lyon's Natecia Clinic tried to make light of the incident, even delaying the removal of the forceps because "another 24 hours would not change her life." 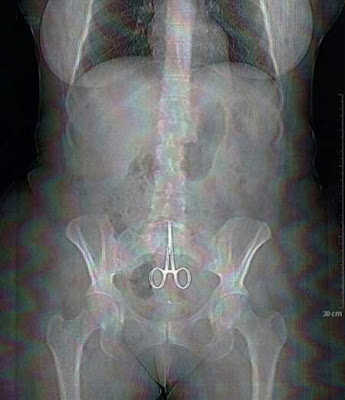 The forceps were finally removed on Monday by Dr Dessapt who kindly pointed out there would be nothing more to pay. "He's still not apologized. He said these things happen and it's just as well I'm at the end of my career, " a disconsolate Anne said. "He said [the removal] was my St. Valentine's present!"

The director of the clinic, Jean-Loup Durousset, offered an apology of sorts on Tuesday on behalf of his surgeon, while declaring: "I've worked for 25 years with this doctor and never had a single concern." He said he was hoping to smooth over relations between doctor and patient, but Anne and her husband were said to be considering their legal options.