A drunk man at the Kaiserslautern train station sounded a fire alarm Wednesday in hopes that fire fighters would rescue his beer, police reported. He is now under investigation for the misuse of emergency services.

The 44-year-old had stepped off a train along with a 28-year-old friend for a smoke break at the station in the Rhineland-Palatinate city. But the duo were dismayed to see the train drive away without them – carrying a bag full of beer they’d left behind, according to the police statement. 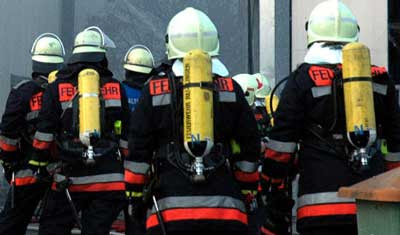 Panicked, the older man broke through the protective glass around a fire alarm, prompting Kaiserslautern fire fighters to rush onto the scene. “There was no real emergency,” the statement said. “Because there was no other contact person on the platform, the drunk man sounded the alarm.”

Authorities determined that he had a blood alcohol content of 1.95 promille, or .195 percent. The man also injured his hand while breaking the glass casing around the alarm, they said.
Posted by nacktman at 8:58 PM