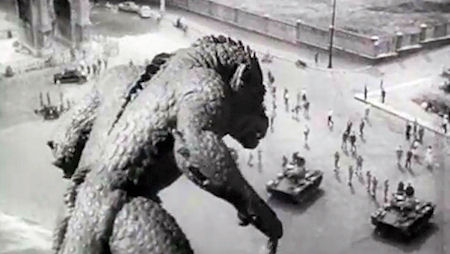 image from 20 Million Miles to Earth
Ray Harryhausen is an American film producer and special effects creator. He created a brand of stop-motion model animation known as 'Dynamation.' With a plethora of films under his belt ranging in genres from sci-fi to ancient myths, nearly each and every one of his movies has become a permanent fixture in pop culture thanks to one common denominator among all of them: the monsters!

There's nothing quite like wondering which mythological creatures or prehistoric beasts will appear in his films to menace the B-movie actors on screen, or debating which ones were truly the best of the best. Who's better? The cyclops or Medusa? The Beast from 20,000 fathoms or the giant crab?

Here are the 11 greatest Ray Harryhausen monsters.
Posted by nacktman at 11:38 AM