An unfortunate looking goose named Edward Scissorhands has narrowly survived being shipped off from his home on Hampstead Heath in London to a swan sanctuary. Park rangers had been considering whether to deport Canada goose Eddie from his home on Sanctuary Pond after a gaggle of concerned walkers warned that he had been mauled by pet dogs on the beauty spot. Eddie, named after the nightmarish character, has a genetic condition known as angel wing which causes his feathers to stick out sideways and renders him totally flightless.
The pond dweller had also been suffering from a bad case of malting in recent weeks, making him look even more ruffled and battered than usual. Wildlife enthusiast and photographer Ron Vester had been concerned that rangers were set to remove the well-known local character and stepped in at the 11th hour to plea for a stay of deportation on Eddie’s behalf. “His wings stick out like spikes, they’re not beautifully flowing feathers and this poor little creature has been living on that pond for five years,” said Mr Vester. “So many people had called in to say he had been attacked, but people who know him said: ‘No that’s just Eddie, he’s fine’. It was all just a little mistake.” 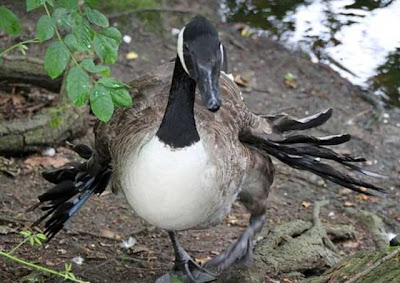 Officials from the Swan Sanctuary in Shepperton, Middlesex, paid a visit to Eddie last week and decided it was safe for the Canada goose to stay. A spokesman from the City of London Corporation, which manages the Heath, said: “Our rangers had taken calls over the last three weeks from concerned members of the public – thinking he had been attacked by a male swan or a dog. The Swan Sanctuary advised us to leave him where he is because the pond is fenced and protected from dogs.” Eddie was born on the Kenwood Ponds alongside eight other goslings, but straight away wildlife watchers could tell that there was something strange about him.

“We all just thought he wouldn’t last because of his condition and not being able to fly,” said Mr Vester, from Aspern Grove in Belsize Park. “But someone picked Eddie up and moved him down to Sanctuary Pond where he has been happily ever since.” Angel wing has been linked to geese who enjoy a high calory diet such as white bread. Adrian Brooker, an ecologist for the City, said: “Angel wing can be caused by a high-calorie diet, especially one high in proteins and/or low in vitamin D or vitamin E. Indeed we actively encourage Heath users not to over feed wildfowl with bread, nuts or seeds.”
Posted by nacktman at 5:39 PM