Evidence of Water Ice on Mercury 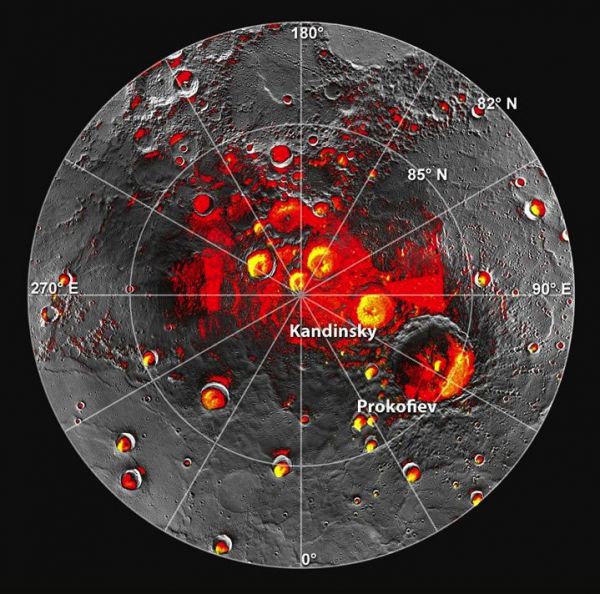 Data sent back to earth from the MESSENGER spacecraft shows that Mercury holds water ice and other frozen materials. We think of Mercury as a hot planet, but there are deep craters near the planet's poles are never touched by sunlight. Still, any water ice in the craters is buried under other materials.


MESSENGER uses neutron spectroscopy to measure average hydrogen concentrations within Mercury's radar-bright regions. Water-ice concentrations are derived from the hydrogen measurements. "The neutron data indicate that Mercury's radar-bright polar deposits contain, on average, a hydrogen-rich layer more than tens of centimeters thick beneath a surficial layer 10 to 20 centimeters thick that is less rich in hydrogen," writes David Lawrence, a MESSENGER Participating Scientist based at The Johns Hopkins University Applied Physics Laboratory and the lead author of one of the papers. "The buried layer has a hydrogen content consistent with nearly pure water ice."

Data from MESSENGER's Mercury Laser Altimeter (MLA) — which has fired more than 10 million laser pulses at Mercury to make detailed maps of the planet's topography — corroborate the radar results and Neutron Spectrometer measurements of Mercury's polar region, writes Gregory Neumann of the NASA Goddard Space Flight Center. In a second paper, Neumann and his colleagues report that the first MLA measurements of the shadowed north polar regions reveal irregular dark and bright deposits at near-infrared wavelength near Mercury's north pole.

Read more about the discovery at NASA.
Posted by nacktman at 7:42 PM