Jonathan Simkins is an expert in flying insects. He has a degree in entomology from the University of Florida, and has been working in the industry for more than twenty years. Simkins is the owner of Insect I.Q. He travels all over Florida to deal with honey bees, Africanized bees, yellow jackets and other stinging insects. Recently, he faced the challenge of his life. 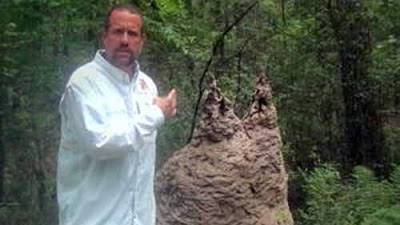 A million angry, venom-filled yellow jacket wasps deep in the Florida woods. “This nest was an amazing nest,” he said. “It was the most interesting and awesome experience I’ve ever had.” Simkins was staring down a yellow jacket colony about the size of a Smart car that posed a lethal danger to hunters and lumberjacks on a thousand-acre timber lot in Central Florida. It took him two days to vanquish the three-to-five-year-old colony, which housed a thousand queen wasps and a million “daughters.”

“When I first went out there, this colony was camouflaged. I didn’t even see it until we walked up to it.” But they saw him. Sentry yellow jackets buzzed toward him to check him out when he was still 40 meters away. Clad in two bee suits, the veteran stinging insect expert stirred up the nest a few times to study the wasps’ method of defense. “The noise was amazing. It was like a yellow jacket tornado coming for me.

“The alarm pheromone was so strong it made my eyes water and my nose run. When they land on you, they regurgitate so the others can find you.” He would have liked to have taken the massive nest to his alma mater, the University of Florida, but its size, threat and remote location prevented that, he said. “I wish I had had more time to have studied it a longer.” Despite his protection, Simkins was stung seven times on his neck and face by wasps that managed to slink past the cloth mesh over his head.
Posted by nacktman at 9:24 AM