Two Pennsylvania realtors have been cited for disorderly conduct and harassment after reportedly scattering dead mice and snakes onto their neighbor front yard. Jonathan and Andrea Straub were caught on a security camera tossing dead animals, cutting branches off trees, and knocking over their neighbor “For Sale” signs, Lower Merion police say. The high-powered realtors had put their own home up for sale and allegedly didn’t appreciate their neighbor tacky attempts at marketing. 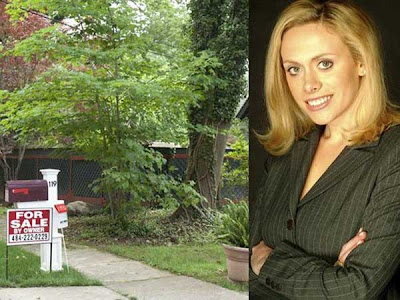 Both of the houses on Booth Lane are listed for at least $1 million. Neighbor Mary Martell’s home sits directly behind the Straub’s home. She was trying to sell the house by herself. Andrea Straub, on the other hand, was born into the real estate industry. Her father is a top builder and developer while her mom worked as a broker. The award-winning real estate agent graduated from New York University with honors and handled multi-million dollar home sales for Prudential Fox & Roach.

On her website, she calls herself a skilled negotiator and a “people person.” But her negotiating skills failed to win over her neighbor. Straub’s lawyers say the squabble started over Martell’s “For Sale” signs, which the real estate couple claimed violated township codes. When the Straubs tried to forcibly remove the signs, the neighbor caretaker became confrontational. After Martell was hospitalized for an unrelated condition, her house sitter noticed that someone had been knocking over the signs and stealing the real estate flyers advertising the home. Martell then had a security camera installed on her property and managed to catch the Straubs red-handed. When police played the tape for the Straubs, they didn’t deny the allegations, said Lower Merion spokesman Tom Walsh.

The Straubs’ lawyers call the charges “absurd.” They say the couple never confessed to the crime and that the people in the surveillance footage aren’t even recognizable. “This is spun out of control,” said lawyer Anthony List Jr., adding that dead mice and garden snakes are a common sight in residential neighbourhoods. Straub was fired from her job at Prudential Fox & Roach on Friday. Her husband Jonathan is a part-time real estate agent who has a bottle packaging business. Defamation lawyer George Bochetto said that the Straubs will have a press conference next week to “divulge previously unreported facts in the case.” "The Straubs are victims of horrible falsities and we will prove it in the court of law," Bochetto said in a statement.
Posted by nacktman at 10:06 AM