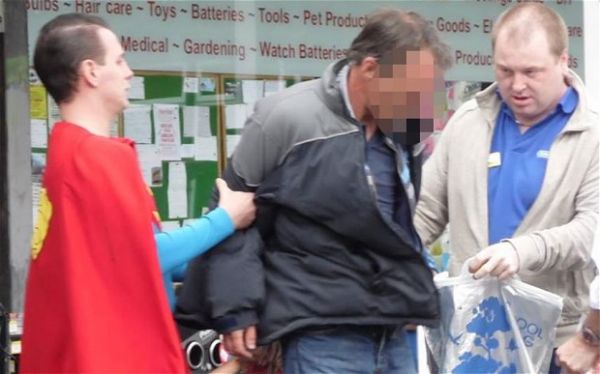 Luke Junior--not Clark Kent--was working as a costumed mascot in Sheffield, UK when he saw a store manager chasing a shoplifting suspect. That's when Superman flew into action:


Mr Junior, who works as a security guard at a shopping centre but hopes to become a fireman, said: "The last thing you want to do is run straight into Superman.
“He was going nowhere but the police station.
"He tried to run away from the manager so I grabbed him again and he was kicking off. Then I ended up physically restraining him against the window.
"The two policewomen were very professional. They didn't even crack a smile but I can imagine they might have done when they got to the police station later that night.
"But everyone else was cheering and clapping. Then the Superman music came on.
“I went back to the children and, as Superman would, I told them to always stay on the right side of the law.”

You can watch a video at the link.