A fire has destroyed a fire station in Mount Albert, northeast of Newmarket, Ontario, Canada. Intense flames quickly ripped through the fire station just after 8am on Sunday. 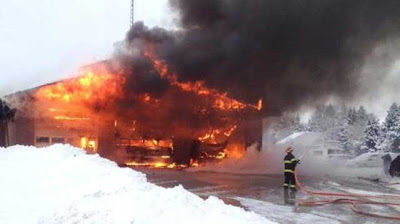 As the fire spread, the sound of the explosions rocked the community. As thick black smoke billowed and fire engulfed the station volunteer fire fighters couldn’t get access to equipment and had to wait for crews from other stations to arrive.
The station is un-manned and no one was inside when the fire started. What’s left of the station was smouldering all day on Sunday and while crews put out hot spots investigators with the Fire Marshal’s Office sifted through the debris for any evidence that can help determine a cause.

“The station did have vehicles in it and that could be the source but I don’t want to get any details until we have the facts,” says East Gwillimbury Fire Chief Phil Dawson. There were six emergency vehicles inside the hall when the fire broke out – including a brand new pumper truck.
Posted by nacktman at 12:06 AM