Officials at an upstate New York school district say a kindergartner spent a day at the wrong school after getting on the wrong bus. Schenectady city school district officials say the series of mistakes began on Wednesday morning when 5-year-old Janeya Nevins boarded the wrong bus, which was driven by a substitute driver. 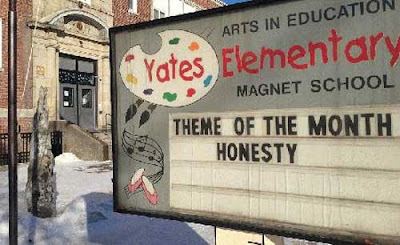 Janeya's mother, Patricia Rodriguez, said that while she acknowledged putting her daughter on the wrong bus, she said she recognized the bus and the substitute driver from another time she sent her daughter to school. At the school, teachers were expecting a new first-grader and asked Janeya if she was that student.

Janeya said she was and spent the day answering to the no-show first-grader's name. The mistake wasn't discovered until the kindergartner's mother called her school to report that her daughter didn't get off the bus that afternoon. School officials say they located her a short time later.

YouTube link.
Superintendent Larry Spring said that the person who usually makes calls regarding attendance issues at the girl's school was out that day, so a call was not made to Rodriguez. "While the student did impersonate another student, which didn't raise any red flags, the situation has brought to light some other serious issues that need to be addressed on our end," Spring said in a statement. The district says it's re-examining its bus and new student procedures.

There's a follow-up news video here.
Posted by nacktman at 12:06 AM