Woman charged with driving while intoxicated twice in three hours 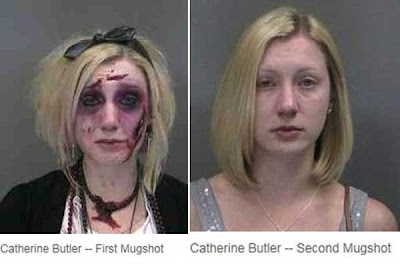 Police in Gates, New York, say they arrested the same woman twice in less than three hours for driving drunk.

Police say 26-year-old Catherine Butler of Rochester was arrested at round 2am on Saturday for driving without headlights. Investigators believe she was coming from a Halloween party.
She was charged with DWI and a friend picked her up from the police department. Just before 5am the same day, police say they picked her up again. Officers say Butler was swerving in and out of her lane.
She was charged a second time with DWI. Investigators say Butler was arrested for DWI by Gates Police in 2006 and again in 2011 by Brighton Police. Butler is due back in court next month.
Posted by nacktman at 12:05 AM