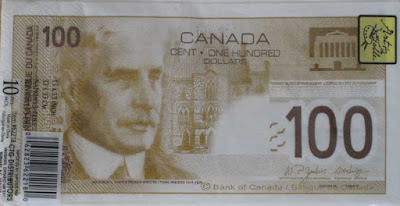 A suspended sentence was handed down recently in a Canadian provincial court to a Lennox Island man who tried to produce counterfeit money using table napkins manufactured with images of $100 bills printed on them.

The court was told that 22-year-old Cass Alder purchased a package of napkins stamped with images of $100 bills, cut the images out of the napkins and secured them to paper using a glue stick.
To ensure the image of the $100 bill was affixed to the paper, it was placed in the oven for a short period of time. Alder then tried to purchase several items at a convenience store with one of the bogus bills. The clerk refused to accept it.
Alder then left the store, leaving the bill behind. His attempt to pass counterfeit money resulted in a term of probation of 18 months. Speaking for himself, Alder said he’d made a lot of mistakes in his life. "It took me a long time to realize I deserved better than this for myself,” he said.
Posted by nacktman at 12:12 AM