Snake descended into couple's kitchen before eating an egg 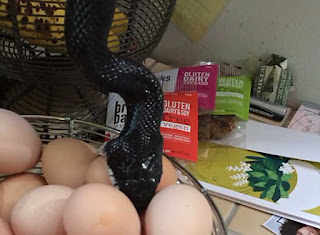 Robert Hildreth and Laura Neff of North Carolina saw a long black snake slithering from their spice cabinet to their egg basket on Sunday evening.

Neff said they heard a bang from the kitchen at around 6pm. They saw a cinnamon jar on the floor and a rat snake about 4 feet long descending toward the eggs.
They let the snake finish the egg, then caught it between two brooms and moved it unharmed to the outdoors, Neff said.

YouTube link.
Hildreth and Neff, who live between uptown Charlotte and Mountain Island Lake, later found a hole in their laundry room where they believe their visitor entered and covered it with “a VERY heavy concrete block.”
Posted by nacktman at 12:05 AM