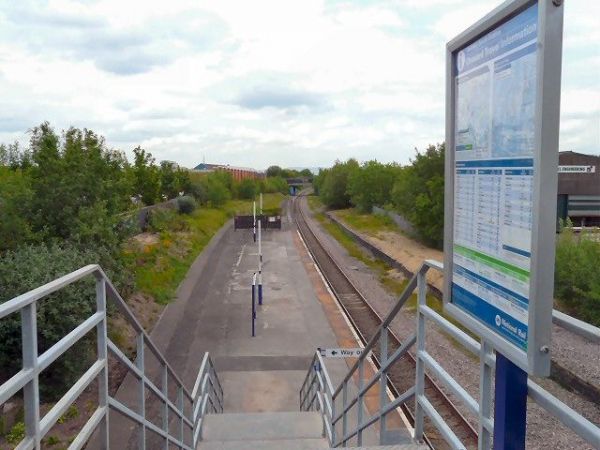 Ghost trains in Britain are not supernatural -they’re real! It’s a term used for trains that serve a vestige of a line that should be closed. They may run once a week or even less often, aren’t advertised, and serve stations that aren’t maintained. Why do they run at all? Because in Britain, it’s more expensive to officially close a line than to keep it open, no matter how poor the service. That leaves a bunch of train stations that are officially open, but hardly ever used, and certainly neglected. Like the Reddish South Station, pictured.


The 3rd least-used railway station in the whole of the UK, Reddish South racked up a mere 26 visitors in 2013/2014. In a strange way, it’s impressive that it’s even that high. Unlike Teesside Airport, which runs a service there and back once a week, trains from Reddish South merely depart. Those wishing to return will have to find another way of getting back.
In other ways, too, the station is utterly dismal. A lack of electric lighting means it becomes a dark and slightly-threatening wasteland at night; a spooky black hole on the edges of the community. As its Wikipedia article glumly points out, even the badly-served Denton station further up the line boasts a bench as its sole passenger facility. Reddish South boasts nothing.
Visually, the station is terrifically unappealing. The cracked and faded platform seems designed for overcast weather, and the steps are badly rusted. The entrance is even gated shut and surrounded with grim signs threatening ‘trespassers’ with thousand pound fines. Perhaps it’s no wonder Reddish South is so badly underused.

Ten such stations are profiled at Urban Ghosts. Some are spookier than others. Is there one near you?
Posted by nacktman at 12:11 AM