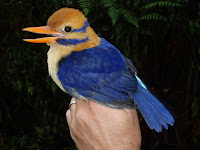 The first ever photographs of the elusive male mustached kingfisher were recently released by the American Museum of Natural History. They show a vibrant blue adult bird in apparent good health. However, researchers then elected to kill the endangered bird in order to further study it. Paul Sweet, collection manager for the museum’s Department of Ornithology, told Audubon that he and his colleagues assessed the state of the bird’s population and habitat, and concluded it was substantial and healthy enough to withstand the loss.

The suspenseful moments before the bird’s discovery are recorded in a field journal written by Chris Filardi, who is director of Pacific Programs at the museum’s Center for Biodiversity and Conservation. He and his colleagues were in the remote moss jungle highlands of Guadalcanal in the Solomon Islands when they heard a distinctive call: “ko-ko-kokokokokokokokoko-kiew!” They paused and scanned the forest. After time passed, “There in plain sight pumping its tail, crest alert, in full colors, was the mustached kingfisher,” Filardi wrote. “And then, like a ghost, it was gone.” For days the researchers looked for the bird. They set fine nets into the forest canopy, hoping to capture the individual.
After a blustery morning of cold winds and rain showers, they managed to capture the male mustached kingfisher. “When I came upon the netted bird in the cool shadowy light of the forest I gasped aloud, ‘Oh my god, the kingfisher,’” Filardi recounted. “One of the most poorly known birds in the world was there, in front of me, like a creature of myth come to life.” Photographs were taken of the bird. Frank Lambert, another member of the research team, also managed to record the bird’s distinctive call. The recording has not yet been released. The mustached kingfisher is listed as endangered by the International Union for Conservation of Nature. It is estimated that there are only 250–1000 mature individuals left, but the bird’s elusiveness puts even those figures into question. 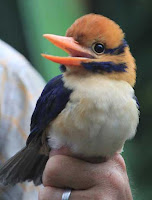 Its entry on the IUCN Red List of Threatened Species reads: “This spectacular species is judged to be endangered on the basis of a very small estimated population, which is suspected to be declining, at least in part of its range. However, further research may reveal it to be more common.” The decision to kill the bird has led to heavy criticism. Marc Bekoff, professor emeritus of Ecology and Evolutionary Biology at the University of Colorado, said: “Killing ‘in the name of conservation’ or ‘in the name of education’ or ‘in the name of whatever’ simply needs to stop. It is wrong and sets a horrific precedent for future research and for children. Imagine what a youngster would think if he or she heard something like, ‘I met a rare and gorgeous bird today…and I killed him.’ Even if this handsome male were a member of a common species, there was no reason to kill him. It sickens me that this practice continues and I hope more people will work hard to put an end to it right now, before more fascinating animals are killed.”
Posted by nacktman at 12:08 AM