Top Ten of the World's Most Dangerous Airports 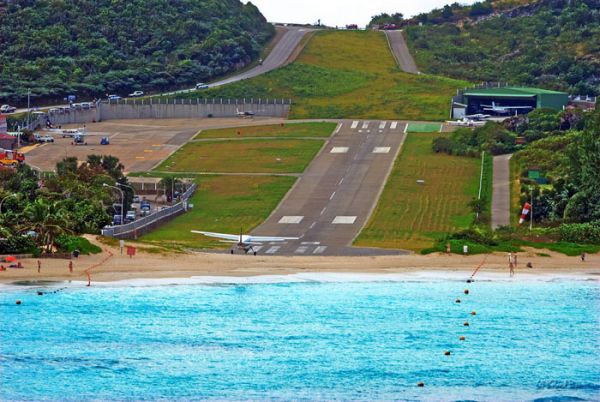 Gustaf III Airport, Saint Barthélemy
"They say" the odds of dying in a plane crash are minute. Usually a comparison is made to deaths in car accidents, which are much more likely. Supposedly the odds of dying in a plane crash are one in eleven million. That statistic should at least somewhat ease the nerves of anxious flyers. That is, unless they happen to be flying in or out of the airports shown here. Each of them are on a list of the top ten most dangerous airports, and simply seeing pictures of each explains most of the reasons why.
One example, pictured above, is the Gustaf III Airport, located on the French island of Saint Barthelemy in the Carribean. With an area of only 9.7 square miles, the entire surface of St. Bart leaves not much room for any type of mechanical error. Its airport, located mainly on the slope of a hill, allows only for small aircraft that carry up to 20 passengers.
Follow this link to see photos of nine other airports considered by this article to be the world's most dangerous.
Posted by nacktman at 12:11 AM