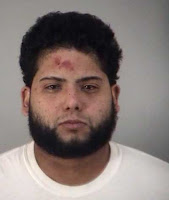 A speeding motorist in Florida who told a Lake County Sheriff’s deputy he was racing home to go to the bathroom ended up urinating and defecating in the back of the officer’s patrol car.

But that was only after 24-year-old Carlos Adonis Ramos-Erazo refused to get out of his vehicle, drove off after hitting the deputy’s arm with the vehicle and had to be chased down and shot with a Taser. The deputy pulled over Ramos-Erazo’s vehicle for doing 75 mph in a 55-mph zone on Thursday morning on US.Highway 27.
His explanation was he needed to get home to use the bathroom. The deputy said Ramos-Erazo refused to get out of his car, and when the officer reached through the driver’s door to unlock it and remove Ramos-Erazo, he drove off, striking the officer’s arm. The man made it to his Beacon Ridge Way home, got out the vehicle and ran, causing the pursuing deputy to shoot him with a Taser. In route to the Lake County Jail, the suspect urinated and defecated in the back of the patrol car. Ramos-Erazo was charged with fleeing, battery on a law enforcement officer, aggravated assault with a motor vehicle on a law enforcement officer and resisting with and without violence. He was released from jail after he posted an $18,000 bail.
Posted by nacktman at 12:04 AM