Headless corpse turned out to be a discarded sex doll

Police in Germany were called out early on Wednesday to the scene of what seemed to be a grisly murder.

A street cleaner in the town of Lübeck near Germany's Baltic coast called police to tell them he had found a female corpse lying on the street next to a paper recycling container. 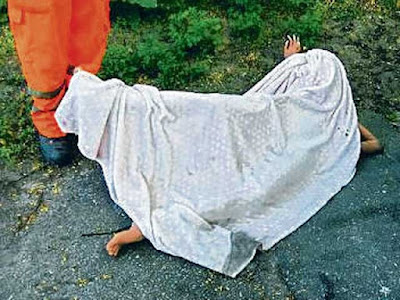 The lifeless body was wrapped in a blanket with a foot jutting out of one end. Officers from Lübeck’s 2nd police district jumped into action, rushing to the scene as fast as they could.
“After more exact criminal observation, it was ascertained that we were dealing with a so-called sex toy which had no head,” the police report revealed.
Posted by nacktman at 12:07 AM