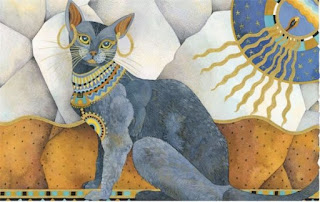 Cats are truly amazing creatures, and since humans have never been able to fully tame those tiny tigers it's not all that surprising to hear a new study has found cats pretty much domesticated themselves.
But this discovery does seem to indicate that cats like humans as much as we like them, a secret the Feline Illuminati would kill to keep under wraps.
Casey Smith reported about the findings in National Geographic:


The earlier ancestors of today’s domestic cats spread from southwest Asia and into Europe as early as 4400 B.C. The cats likely started hanging around farming communities in the Fertile Crescent about 8,000 years ago, where they settled into a mutually beneficial relationship as humans’ rodent patrol.
Mice and rats were attracted to crops and other agricultural byproducts being produced by human civilizations. Cats likely followed the rodent populations and, in turn, frequently approached the human settlements.
“This is probably how the first encounter between humans and cats occurred,” says study coauthor Claudio Ottoni of the University of Leuven. “It’s not that humans took some cats and put them inside cages,” he says. Instead, people more or less allowed cats to domesticate themselves.
A second lineage, consisting of African cats that dominated Egypt, spread into the Mediterranean and most of the Old World beginning around 1500 B.C. This Egyptian cat probably had behaviors that made it attractive to humans, such as sociability and tameness.
The results suggest that prehistoric human populations probably began carrying their cats along ancient land and sea trade routes to control rodents.