We giggle a bit at the implausible ways detectives on TV solve crimes, like the impossible "enhance" technique that allows us to see hi-res images on low-res security video. But crimes have been solved by thinking outside the box, in ways that may surprise you. They should have called this list five police "techniques," as there are actually more than five cases here. Several of them were solved by the presence of glitter. 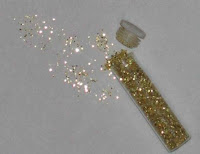 Glitter might look all the same to you while you're trying to get that shit off your sweater, but there's reportedly "tremendous variation" in the stuff. Bulk glitter conglomerates can boast of having tens of thousands of different types to decorate your belongings, nether regions, and disgruntled pets as you see fit. Knowing this, one can see how leaving even one fleck behind after committing a foul deed can lead investigators right back to the exact Frederick's of Hollywood where you bought your sparkly apple-flavored nipple balm.
The first recorded instance of glitter being used as trace evidence happened at the end of the Cold War in Germany, when the U.S. Army's crime lab used it to solve a sexual assault case during a local celebration. Specific glitter from the victims' Mardi-Gras-like costumes was found on the clothing of the suspects. Another time, a killer in Alaska was nabbed in part because his estranged wife had dropped glitter in his car at some point, and some of it stuck to his victim. More recently, this method was used to bust a deadly hit and run driver who denied being at the wheel, but had a hard time explaining how the exact same cosmetic glitter she wore on her face wound up plastered to the airbag.

Read about glitter, glass. mosquitoes, and other odd ways police have found a perpetrator at Cracked.
Posted by nacktman at 12:06 AM