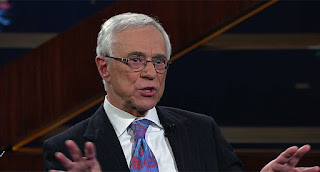 During Friday’s “Real Time with Bill Maher,” retired Col. Jack Jacobs was floored when the host cited statistics about wingnuts wanting to see Dumbass Trump attack North Korea.
The conversation began with a question about the Veterans Administration and the way politicians don’t seem interested in helping veterans after they’re elected.
“There is not a constituency among veterans,” he explained while talking about how politicians all use them during campaigns. “Most Americans don’t know anybody in uniform. We have one half of 1 percent of the American public in uniform. We’ve effectively outsourced the defense of the republic to a very small number of young men and women, who are willing to do that. So, there’s not a natural constituency. I’m not surprised nothing is ever done.”
Maher then asked him if he found it disturbing that nearly half of all wingnut want to see Dumbass Trump attack Kim Jong-Un.
“Do they really?” Jacobs asked.
“Yeah, 46 percent say, ‘Let’s go!'” Maher cited.
“Well, they should suit up and go do it themselves,” Jacobs replied as the audience applauded.