Jackson the mandrill appears to be giving visitors to the zoo 'the finger' but he cannot help being rude. He has a form of arthritis that causes him to raise his central digit when bring watched having his picture taken at his zoo.

‘I was there photographing him, and a father and sons were watching him,’ said Mark Rogers, who captured the finger in full flight. Jackson’s a bit grumpy and really doesn’t like being photographed, but what he likes even less is people shouting at him. 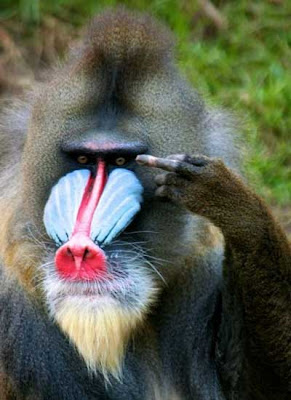 'The father tried to make fake ape sounds and Jackson raised his hand with the finger extended. The entire crowd watching him then laughed out loud and the father quickly stopped making the noise.’ Mr Rogers added: ‘I did find out later that the mandrill had arthritis in that finger. I can’t help but wonder if he used that to his advantage.’

A spokesman for San Francisco Zoo, where Jackson lives, said the baboon does not intend to offend. ‘He doesn’t usually swear at our visitors but at least he made people laugh as usually he hates the attention,’ he added.
Posted by nacktman at 2:17 PM