Some in Vermont aren't sweet on standard syrup grading 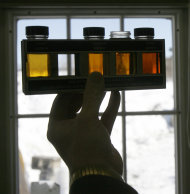 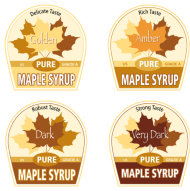 In a state that has a long history of maple syrup production and fiercely protects the purity of its brand, Vermont producers are proud of their "fancy," ''grade A dark amber" and "grade B" syrup. But the terminology has the potential to perplex consumers, particularly as Vermont's syrup production, which has boomed in the past decade, reaches broader markets.
So Vermont is considering joining with other syrup-producing states and Canadian provinces in selling a product with one grading standard, triggering fears by some producers that the state's vaunted brand will lose its reputation if it doesn't stand out from the rest — as they say it should.
"You're lumping Vermont syrup in with all the rest of them," said Kevin Bushee, 69, of the Bushee Family Maple Farm in Danby.
Vermont's syrup, which forms a state industry that nets about $130 million a year, is in fact not the same as others. The state requires that its syrup be slighter denser than other syrups because it thinks it tastes better. That requires that more sap be produced.
Some states already use current USDA standards to grade their syrup, while others, including Vermont, have their own standards. But maple states and provinces are considering getting on board with one system, for consistency's sake.
"Most of the states are watching Vermont to see what we do," said Henry Marckres, a maple specialist with the Vermont Agency of Agriculture.
The new standards would not affect the density, which in Vermont would stay the same. And producers can do their own marketing on labels, such as calling it fancy, in addition to the tiny grading labels.
The four international classifications would be golden color, delicate taste; amber color, rich taste; dark color, robust taste; and very dark color, strong taste, all grade A.
The change will help, not hurt, Vermont syrup sales, supporters say.
"If a jug is on a shelf and if you put maple syrup from different states on the shelf, the most obvious thing is the name of the state it comes from," said Jacques Couture, a Vermont sugar maker near the Canadian border and director of the board of the Vermont Maple Sugar Makers Association. "So I don't worry at all about that distracting from Vermont's. Vermont's brand is what it is, and I don't think that anybody's going to take away from that."
The flavor descriptions are a big plus for consumers who might get confused by Vermont terms like "fancy" or "grade B," which imply that one is better than or inferior to others but really refer to strength, color or other characteristics, experts say. The ultimate choice varies from consumer to consumer, experts say.
"When we talk to new customers in our case on a daily basis, we almost always have to explain the difference between the grades and why the grades are called such as they are," Couture said.
People in Vermont take their syrup seriously. The state has even gotten complaints from people who bought "fancy" syrup but then complained about its delicate flavor.
"It was just a beautiful fancy light flavor and they were used to something strong and they thought it was a fake," Marckres said.
One apparent advantage of the new international standards for Vermont producers is the fourth grade — very dark color, strong taste — which would include some of the syrup that now is sold only in bulk for processing because of the strong flavor.
But that bothers Bushee, too.
"I don't want to see our markets get downgraded by using the commercial syrup," he said. But Jacques any others say the strong maple flavor is growing in popularity among chefs.
The change is not expected to cost producers, who have to buy labels anyway. They cost about $6 for a roll of a thousand.
The USDA plans to adopt the new terms in 2013. Neighboring New York is working with the industry to propose new regulations to incorporate the international standards, said Joe Morrissey, a New York Department of Agriculture spokesman.
Vermont will hold a series of public hearings this month. Depending on the feedback, the state agriculture secretary will decide whether or not to go ahead with rule changes to adopt the standards.
Posted by nacktman at 7:33 AM