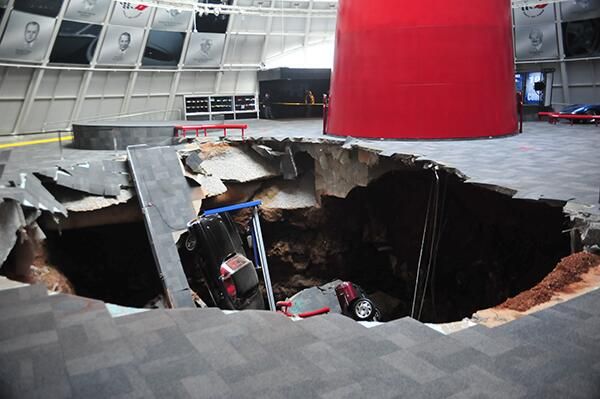 Of all the places a sinkhole can open up and swallow cars, would you believe it had to be in the National Corvette Museum? Western Kentucky is full of underground holes, the most famous of which is Mammoth Cave. This morning, another one was born, right under six rare 'Vettes owned by the museum and two on loan from General Motors.


Bowling Green city spokeswoman Kim Lancaster said the hole opened up at about 5:40 a.m. CST Wednesday, setting off an alarm and a call to the fire department. Frassinelli said no one was in the museum at the time.

The hole is in part of the domed section of the museum, and that area will remain closed. That's an original part of the facility for which was completed in 1994. The fire department estimated the hole is about 40 feet across and 25 to 30 feet deep. Pictures of the sinkhole show a collapsed section of floor with multiple cars visible inside the hole. A few feet away, other Corvettes sit undamaged and undisturbed.

No one was injured. The dome is closed, but the rest of the museum is open.
Posted by nacktman at 12:05 AM