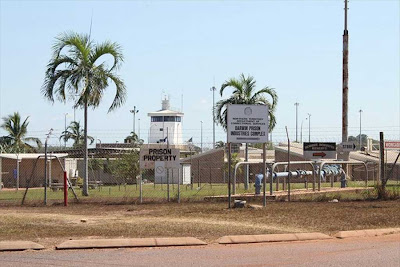 At least four prisoners in Darwin in Australia's Northern Territory are suspected of repeatedly escaping from the prison, getting drunk, then voluntarily returning to the facility in the hope no one would notice. It is understood authorities are checking whether low-security prisoners have repeatedly escaped from a work release center at Berrimah jail for a few hours after a 7pm headcount.

"It would appear that a couple of prisoners have jumped the fence but returned," a spokesman for NT Department of Correctional Services said. Authorities were believed to suspect the group, and possibly other prisoners, were from time to time jumping a cyclone fence, getting picked up from a main road by partners and given alcohol and marijuana, before breaking back into prison a few hours later.
The deception was eventually discovered shortly after midnight in the early hours of Sunday July 20 when five drunk prisoners were found fighting over a mobile phone. "It is alleged that four of the prisoners had earlier climbed a perimeter fence to retrieve contraband items from someone on the outside," the department spokesman said. He added the group "may have been out for a while" but that would become clear only after a police investigation. An internal departmental investigation was also underway, the spokesman said
"They [police] will come back with recommendations as to what charges will be laid," he said. "It will be up to police to determine what constitutes an escape." A search of the work release center uncovered several other items of contraband including two empty bottles of alcohol, five mobile phones, phone chargers, a small quantity of a "green leafy substance", a cigarette lighter and rolling papers. The men have since been transferred to the prison's maximum security section.
Posted by nacktman at 5:06 PM