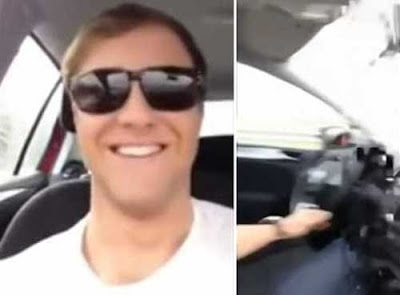 A 20-year-old man who was arrested by police after posting a YouTube video of himself driving from the passenger seat on a highway near Barcelona has been given a six-month suspended sentence.


The Spanish-born student of French nationality was found guilty of reckless driving. That sentence will be dismissed if the young man does not break the law in the next two years.
He also had his driver's license suspended for a year. The man was arrested after posting a video of himself, yawning as he drove his vehicle from the passenger seat, at one point overtaking a truck.

YouTube link.
Spanish police sent out a tweet asking for help in identifying the individual, and received 40 replies in 13 hours. The driver, who has not been named, was identified, and later turned himself in.
Posted by nacktman at 5:06 PM