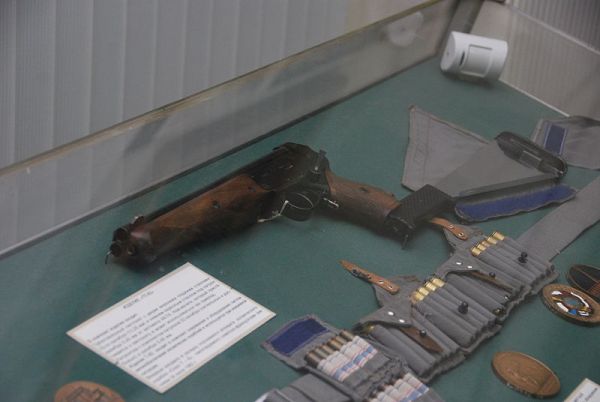 Frankly, American history classes in public schools are lucky if they have time to touch on anything more recent than World War II. Even if they do, there probably wouldn’t be more than a day or two devoted to the entire space race. The story of space exploration is a long and rich one, with occasionally bizarre incidents that we can laugh about, now that we know no one died because of them. This tidbit is bizarre because of the difference in the American and Soviet space programs. Cosmonauts carried a weapon into space that was basically a sawed-off shotgun.


The TP-82 pistol was developed specifically for cosmonauts and packed enough punch to take out a half-ton grizzly bear. That specification is not an accident, either -- despite our sincerest hopes that the Ruskies had armed their cosmonauts with a hand cannon to fight off aliens or in the event they got into a space-train robbery gunfight with the Americans, the gun was actually intended as a survival measure once they were back on Earth. Why? Because unlike the stupid Americans, who directed their spacecraft into the Pacific Ocean, the Soviets cleverly pointed their returning capsules to the nice, soft rock of Siberia. And, as is wont to happen, capsules occasionally went off course, landing somewhere else in the vast, inhospitable wasteland.

In one such instance, two cosmonauts ended up stranded in the middle of the woods in the Urals, 600 miles from their intended landing site, with only a 9 mm pistol to deal with the bears and wolves that lurked in the woods around them. Despite the fact they never encountered either, they managed to convince their bosses that future crews should be packing more heat.

Other stories in a list from Cracked are about American astronauts, and some involve embarrassing bodily functions, told in the colorful language you expect from Cracked.
Posted by nacktman at 12:06 AM