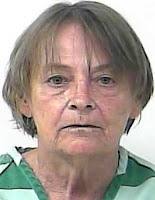 A 65-year-old Florida woman is accused of stabbing her son in the nipple with a pencil after he complained she bought too much stuff at Walmart.

Gale Higley’s son told Port St. Lucie police on June 11 that he came home from a bar and discovered Higley made a lot of unnecessary purchases at Walmart and spent a lot of money.
He said they argued over her “spending habits,” and that his mother stabbed his left nipple with a pencil and slapped his face. Police noticed a small mark on the nipple in question. Meanwhile, the accused nipple stabber said she argued with her son over how she prepared lasagna for dinner. She put the lasagna in the microwave, but he wanted it in the oven.
Higley said she slapped her son, but denied stabbing him with a pencil. Higley appeared intoxicated, as did her son. Investigators found a pencil with no tip. It’s unclear whether the pencil was among the alleged Walmart purchases. Police arrested Higley of Port St. Lucie, on a battery charge. She was taken to the St. Lucie County jail.
Posted by nacktman at 12:05 AM