How A Shipyard Worker Hammered Artillery Shells Into Art 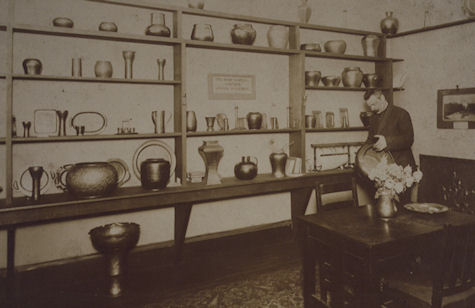 Dirk van Erp was born in 1860 in the Netherlands. His father and other family members were coppersmiths. He immigrated to the United States in 1886, and came to San Francisco in 1890. Considered today the leading Arts and Crafts coppersmith of the early 20th century, Dirk van Erp produced everything from coal buckets and fireplace sets to candlesticks, vases, and lamps, all hand-hammered in studios on both sides of San Francisco Bay.

During his 25-year career, Dirk van Erp taught several generations of coppersmiths the tricks of the trade, helping to make the San Francisco Bay Area a center for copper objects and design.
Posted by nacktman at 9:31 AM