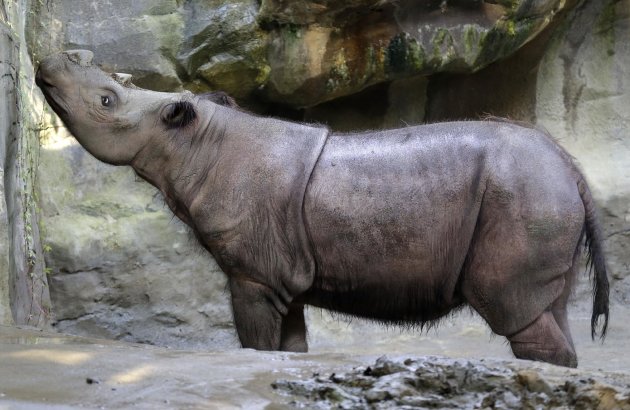 With the survival of a species on the line, Cincinnati Zoo scientists are hoping to mate their lone female Sumatran rhino with her little brother.

The desperation breeding effort with the rhino siblings follows a recent crisis summit in Singapore where conservationists concluded as few as 100 of the two-horned, hairy rhinos might remain in their native southeast Asia. The species numbers have fallen by up to 90 percent since the mid-1980s as development takes away habitat space and poachers hunt them for their prized horns.
Rhinos overall are dwindling globally, and the Sumatran species descended from Ice Age woolly rhinos is one of the most critically endangered.

The Cincinnati Zoo has been a pioneer in captive breeding of the rhino species, producing the first three born in captivity in modern times. Its conservationists this month brought back the youngest, 6-year-old Harapan, from the Los Angeles Zoo and soon will try to have him mate with the zoo's female — his biological sister — 8-year-old Suci.
"We absolutely need more calves for the population as a whole; we have to produce as many as we can as quickly as we can," said Terri Roth, who heads the zoo's Center for Research of Endangered Wildlife. "The population is in sharp decline and there's a lot of urgency around getting her pregnant."
Critics of captive breeding programs say they often do more harm than good and can create animals less likely to survive in the wild. Inbreeding increases the possibility of bad genetic combinations for offspring.
"We don't like to do it, and long term, we really don't like to do it," Roth said, adding that the siblings' parents were genetically diverse, which is a positive for the plan. "When your species is almost gone, you just need animals and that matters more than genes right now — these are two of the youngest, healthiest animals in the population."
The parents of the three rhinos born in Cincinnati have died, but their eldest offspring, 11-year-old Andalas, was moved to a sanctuary in Indonesia where he last year became a father after mating with a wild-born rhino there.
The first coordinated effort at captive breeding began in the 1980s, and about half the initial 40 breeding rhinos died without a successful pregnancy. Roth, who began working on the rhino project in 1996, said it took years just to understand their eating habits and needs and decades more to understand their mating patterns. The animals tend not to be interested in companionship, let alone romance.
"They're definitely difficult to breed because they're so solitary," Roth said. "You can't just house them together. So the only time you can get a successful breeding is if you just put them together when the female is going to be receptive."
Mating between such close rhino relatives might happen in the wild, Roth said, but it's difficult to know because the animals are so rare. If the offspring of such a mating then bred with an unrelated rhino, the genetic diversity would resume in the next generation, she said.
Harapan, who weighs about 1,650 pounds, will be kept separate from his sister, who is a little smaller. On a recent morning at the zoo here, he slathered himself in a mud hole, then ambled over to settle down in a pool of water.
When the time is right to reintroduce the rhinos, the zoo team won't dim the lights or play mood music. Instead, they will use a system of gates to bring the pair together. If they begin to fight or show other behavior indicating things aren't going well, the team will try to separate them, using bananas for distraction.
Before then, Roth and the other scientists will have measured Harapan's testosterone levels while using ultrasound and other monitoring to know when Suci is ovulating.
"You should use the science to guide you," Roth said. "We have really relied on the science."
If the breeding is successful, the zoo will be celebrating a fourth Sumatran rhino birth about 16 months later. If not, other efforts will continue.
Indonesian conservationists have been trying to mate Andalas, the oldest brother, with two other females there after last year's success. His semen has also been banked, but there have been no reported successful artificial inseminations yet.
At the Singapore summit, Indonesian and Malaysian authorities pledged to work together more closely on species survival efforts. Conservationists say special rhino protection patrols have thwarted poachers who kill rhinos to take horns that can be worth tens of thousands of dollars on the black market. The horns are sought for medicinal and other uses — by legend, rhino horns are said to have aphrodisiac powers.
While the Sumatran rhino isn't a particularly popular or even recognizable animal to the public at large, Roth said, the species contributes to the global need for healthy forests with its role in the ecosystem clearing small saplings and brush, and helping spread seeds and make trails smaller animals use. Also, the rhinos don't threaten humans nor damage their crops.
"There's no human-rhino conflict," Roth said. "Are we going to put enough value in wildlife to share the earth with this ancient, peaceful, noninvasive species? If we let the Sumatran rhino die, what are we going to save?"
Posted by nacktman at 9:32 AM