Now that's just Bizarre
A Chinese woman has been rescued after spending the night stuck between two walls because she tried to take a shortcut on her way home. 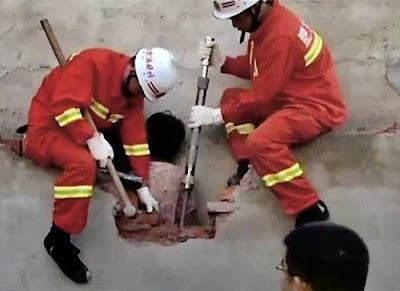 Locals heard the unnamed woman's screams in Anhui Province but assumed it was the voice of a ghost and steered clear.

It wasn't until seven hours later that a passer-by realized the voice was not from the dead and called for help. Firefighters spent half an hour breaking down one of the walls to free her.

The woman had reportedly tried to squeeze through the gap but didn't realize the passage between the walls became narrower and narrower as it went on.
Posted by nacktman at 9:31 AM