Indian customs seize over 10,000 endangered turtles found in the luggage of two passengers

Animal News
More than 10,000 live exotic turtles have been found in the luggage of two passengers at an Indian airport on Thursday.


Two Indian nationals were arrested at the Netaji Subhas Chandra Bose International airport in Kolkata after customs officials discovered the reptiles packed in their suitcases. 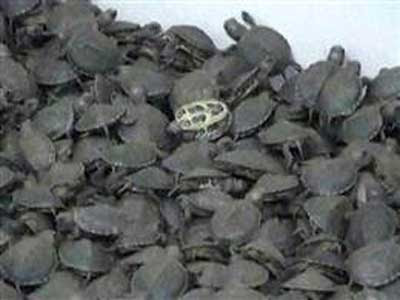 "10,043 numbers of exotic varieties of the turtles have been seized from two passengers, residents of Chennai, who were coming from China to Singapore, and landed at Kolkata airport," said assistant commissioner of Airport Customs, Nabnit Kumar.

The turtles were in three bags waiting to be picked up from a conveyor belt when they aroused the suspicion of customs officials. According to the World Wildlife Fund, nearly all species of sea turtle are classified as endangered and many are at risk of extinction due to human activities. An investigation has been launched into the attempted smuggling case.
Posted by nacktman at 9:32 AM