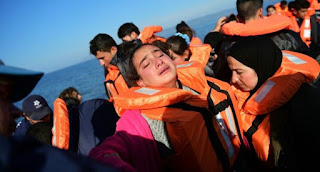 An anti-immigrant, lunatic fringe cabal in Europe wants to disrupt rescue missions and try to prevent migrants from reaching the continent. Defend Europe, whose members classify themselves as "identitarians" who want to protect Europe’s "identity" from immigration, raised money to purchase a ship via a crowd funding campaign and secured €65,000 to attempt to enact its “no way policy” on immigration.