The World's Oldest Known Temple Was Home to a ‘Skull Cult’ 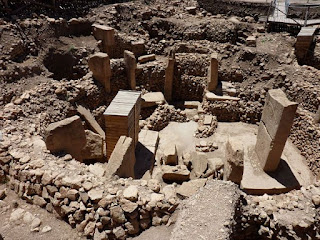 Göbekli Tepe in southern Turkey is a temple that has been dated to more than 11,000 years ago, making it the oldest known temple in the world. Recent findings there include human skull fragments from three individuals that were intentionally carved, painted, and even had holes drilled into them. What was the purpose? Could this be evidence of a skull cult? Paleopathologist Julia Gresky gives us some insight.


Microscopic analysis of the bone revealed that the markings were created by stone tools, probably a short time after the skulls' owners died. Gresky and her colleagues suggest two possible explanations for the modifications: Ancestor veneration, or "branding" of perceived enemies for display. The grooves may have acted as "a track for a cord" to mount the skull, she said, and the drilled hole on the top of the cranium may have been used to suspend the skull like a mobile.
"Maybe they put feathers on the skull to make it more impressive and then presented it somewhere in the structures," Gresky said. "It's all speculation at the moment, but hopefully we'll find some more fragments or maybe also primary burials, so it will be more clear what happened in these monumental buildings."
Though this is the first evidence for skull cults at Göbekli Tepe etched in bone, the structure is filled with artistic representations of headless people, so it's not too much of a stretch to imagine these folks may have been cranially obsessed.

Read more about Göbekli Tepe and the skulls found there at Motherboard.
Posted by nacktman at 12:09 AM