While it has been a while since we lost the use of our mainframe and back up we look forward to having at least the main back up and running by February 20, 2012 although our posting schedule will remain somewhat light for a few days beyond as one of our critical staffers is undergoing knee replacement surgery that day and we will be at her side most of the time for the first few days after that surgery.
After all this time it looks to be that a surge in the current from the power company that zapped the power control(s) of the main and the backup. Well, that is the currently prevailing thought of our tech guy anyway. The unkown surge - as how and why we cannot fathom, there were no storms or outages for other reasons prior to the loss of computer function - has us baffled.
Now if it is only a switch problem and nothing more ... we can all be happy.
Posted by nacktman at 2:29 PM No comments:

Yeti crab cultivates food on its own arms

As reported by Ed Yong at Nature:

The yeti crab — so-called because of the hair-like bristles that cover its arms — is only the second of its family to be discovered... Writing in PLoS ONE this week, Thurber named the crab Kiwa puravida, after a common Costa Rican saying that means 'pure life'... 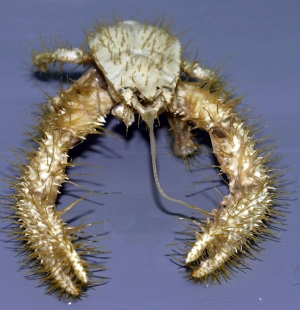 The bristles that cover the crab’s claws and body are coated in gardens of symbiotic bacteria, which derive energy from the inorganic gases of the seeps. The crab eats the bacteria, using comb-like mouthparts to harvest them from its bristles.

The bacteria in K. puravida gardens are closely related to species that live in other cold seeps and hot hydrothermal vents all over the world. “It looks like the bacteria may use the seeps as stepping stones, to create this global connected population that consumes the energy coming out of seeps and vents,” says Thurber.

Thurber thinks that K. puravida waves its claws to actively farm its bacterial gardens: movements stir up the water around the bacteria, ensuring that fresh supplies of oxygen and sulphide wash over them and helping them to grow.  “This 'dance' is extraordinary and comical,” says Van Dover. “We've never seen this strategy before.”

A brief, low-res video of the "dance" is at the link, along with additional details.  Not discussed there is these speculations from the Reddit thread:


If you wondered what kind of complex life can survive major asteroid impact, full-on nuclear winter and so on, remember the humble yeti crab and his bacterial garden. Where he goes, he does not need sun. Only methane seep in the deepest darkness. Cockroaches and even radioresistant-as-hell braconid wasps have nothing on him.

Posted by nacktman at 1:47 PM No comments: 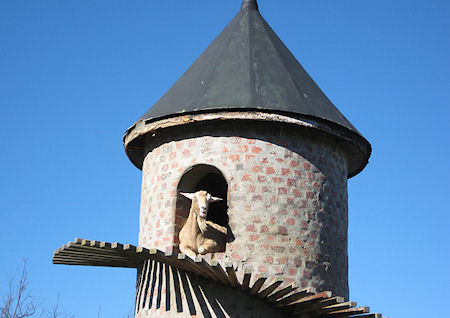 image credit
What do you do when you own a group of Swiss Mountain Goats but there isn't anywhere for them to climb? The answer that South African farmer Charles Back -owner of the Fairview Wine and Cheese Farm - came up with was to create a domicile for his goats that would help keep them fit as well as giving them an altogether better kind class of shed: the Goat Tower.
Posted by nacktman at 1:46 PM No comments:

A tale of a busker, bald tyres and a whistling donkey left the presiding judge, gardaí, solicitors and even defendants in tears of laughter in Dingle District Court as they heard of the unlikely series of events that led to three road traffic charges being brought against a man. Well known Dingle street entertainer Deaglan Ó Muiris of 7 Cuairt Phiarais, Ballyferriter, became the unintentional source of comic relief when Garda Frank Scanlon outlined the scene that greeted him when he stopped the busker for driving with four bald tyres.

Garda Scanlon told the court that having noticed the worn tyres on Mr Ó Muiris's Hiace van, his attention was immediately drawn to the inside of the vehicle, where he saw a donkey looking back at him. He proceeded to tell Judge James O'Connor how the said donkey is part of Mr Ó Muiris's renowned busking act, and is regularly seen with the defendant in Dingle. 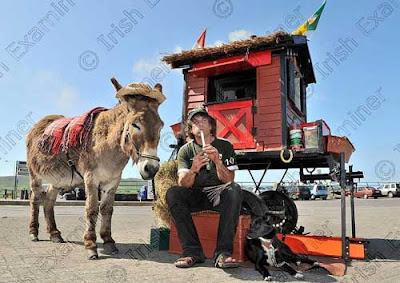 Photo from The Irish Examiner.

When asked by the chuckling judge what the donkey did as part of the act, Garda Scanlon told him he played the tin whistle, causing an outburst of laughter in the courtroom. Solicitor Pat Mann told the highly entertained judge that his client and his donkey are a regular double act at Dingle pier and that Mr Ó Muiris is 'a very good natured man.' He said that after being stopped by Garda Scanlon, he paid €350 for four new tyres for the van.


Withdrawing one of the charges, Garda Scanlon said he was very familiar with Mr Ó Muiris and had come across him on numerous occasions, adding that he had one previous conviction for drink driving dating back a few years. Mr Mann quickly interjected, telling the court that that offence was for driving his Hiace van, and not his donkey. Garda Scanlon agreed that the tyres had been replaced, and concluded his evidence by telling the judge that the donkey has been retired for the winter. The defendant was given until May of next year to pay €300 to the court poor box to avoid a convcition for the bald tyre offences.
Posted by nacktman at 1:45 PM No comments: 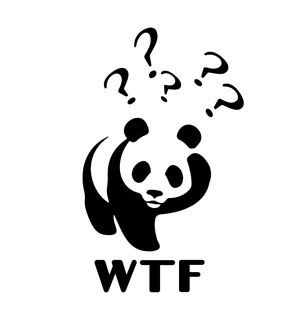 A bag of kittens were dumped out on an Iowa country road and left to die, but two kittens were rescued by an unlikely hero. The Raccoon Valley Animal Sanctuary says animal cruelty is far too common. About three months ago, they received a frantic call from a Madison County woman who pulled two kittens from a bag that her dog found in the middle of the road. Meet Skipper and Tipper, or as sanctuary volunteers call them, the "bag kittens." That's because they should have died in a Meow Mix sack. 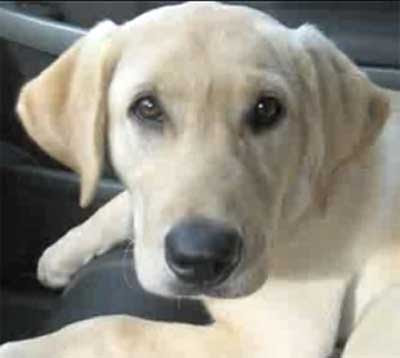 “It was gruesome, quite gruesome because the kittens; there was a litter of 4 or 5 of them and you couldn't tell if there were 2 or 3 in the bag because they had been run over by a vehicle. It was not a pretty sight,” says Linda Blakely of the Raccoon Valley Animal Sanctuary. Tipper and Skipper were sealed into the bag, dumped on a road and crushed by oncoming traffic. It's a miracle they survived the experience. However, that's not the end of the story. Meet Reagan. He found the bag and dragged it all the way home to his owner. Reagan whined until she opened it.

“The instinct of the dog was to nurture and not kill the kittens. With all the blood some dogs would have responded to the scent. Reagan the dog is a hero,” says Blakely. Reagan's owner could hear Skipper and Tipper's faint cries from inside the bag. However, she was totally unprepared for what she found when she opened it. “When she reached in the horror of these kittens covered in blood and guts quickly revealed there was more that didn't make it.”

The kittens were so weak; they had to be fed with a bottle every two hours. Blakely fostered Skipper and Tipper, who were traumatized by the experience. She wasn't sure they would live through the first few days. “Whether them being dumped out was an act of cruelty or desperation we will never know, but we want people to know there's better ways.” Three months later, Skipper and Tipper look like normal, healthy kittens. All thanks to loving pooch and the kindness of a few animal lovers.
Posted by nacktman at 1:42 PM No comments: