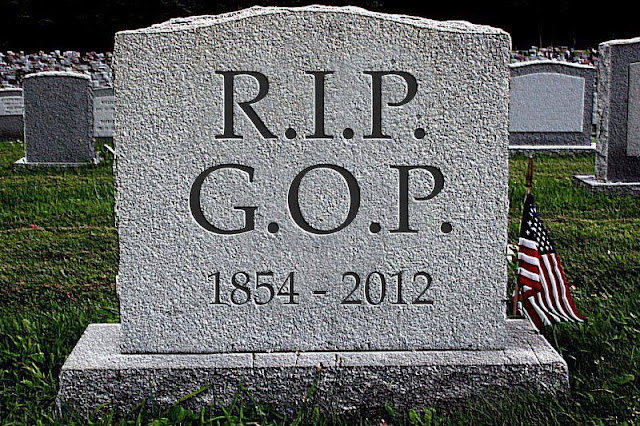 Don't forget to visit our sister blog!
Posted by nacktman at 11:07 PM No comments:

We all know that voting is important, but it's SO important that one Michigan man actually came back from the dead to make sure his vote was cast:


"He was dead," [registered nurse] Houston said. "He had no heartbeat and he wasn't breathing. I started CPR, and after a few minutes, he revived and started breathing again. He knew his name and his wife's name."
What happened next astounded Houston and the victim's wife.
"The first question he asked was 'Did I vote?'"

Tom Greenwood and Rod Beard of The Detroit News has the story: here

Bizarre. Shocking. Unexpected, to put it lightly. Something happened last night.  The country lurched to the left.  And not just on gay rights.  On a number of issues and candidates.


The repugicans Won the House Because They Cheated

First, a word about the House.  From everything I’m reading, House repugicans held on to their majority because the tea party theft of 2010 permitted repugican majorities in state legislatures to redistrict  like crazy, and they basically fixed the election for the House.
So, in a nutshell, the repugicans won the House they way they always win: they cheated.

But even were we to accept the repugicans’ claim that they won some “mandate” last night by holding the House.  I’ve got news for them. If they won a mandate for holding the House, then we won twice the mandate for holding the Senate and the White House.  The voters gave them one lever of power.  They gave us two.  So let’s do play that game.
Now back to everything else.  CNN just announced that Democratic Senator Jon Tester won re-election in a very difficult race in Montana.  Another less-than-expected Dem victory. Now, as for the extent of the Democratic victory, aka, the victories that have meaning.

The rape boys lost.  repugicans Todd Akin (“legitimate rape” from Missouri), who was running against  Democratic Senator Claire McCaskill, and Richard (rape-babies are a gift from God) Mourdock from Indiana) both lost their bids for the US Senate.


Allen West is Toast, and Bachmann Only Just Survived

In the House, where repugicans expanded their majority due to tea party redistricting, some key ideologues lost.  repugican Allen West, a total nutjob from Florida, is reported to have lost. While nutjob-ette Michele Bachmann in Minnesota won a second term, but only just.

Then there’s marijuana.  From AP:

The marijuana measures in Colorado and Washington will likely pose a headache for the U.S. Justice Department and the Drug Enforcement Administration, which consider pot an illegal drug. The DOJ has declined to say how it would respond if the measures were approved.
Colorado’s Amendment 64 will allow adults over 21 to possess up to an ounce of marijuana, though using the drug publicly would be banned. The amendment would allow people to grow up to six marijuana plants in a private, secure area.
Washington’s measure establishes a system of state-licensed marijuana growers, processors and stores, where adults can buy up to an ounce. It also establishes a standard blood test limit for driving under the influence.

Big Wins for Democrats in the US Senate

Okay, that was surprising.
Then there was progressive Democrat Elizabeth Warren beating Scott Brown in Massachusetts, taking back Senator Kennedy’s seat for the Democrats.  Sherrod Brown in Ohio held on to his seat. Angus King, though an independent, he’s expected to caucus with Democrats, won in Maine.  Chris Murphy, another Democrat, won Joe Lieberman’s seat in Connecticut.  Bill Nelson held on to his seat in Florida, and so on.  And Dem. Tim Kaine because repugican George “Macaca” Allen in Virginia.
AP blames the repugican’s significant Senate losses on the tea party:

Now for the gays.
Let’s stop a moment here.  Up until now, we’ve lost these ballot measures every single time.  More than 30 times in a row, we lost.  Now we won.  Suddenly.  And not just once.  But we win all four (if we win Washington state).  That’s not just a coincidence. But those weren’t the only gay victories last night:
And in a way the biggest gay rights victory: A presidential candidate endorsed gay marriage and it not only didn’t cause him to lose, it didn’t even get mentioned by the opposition party, other than a last-minute effort by Marco Rubio and the religious right to phone bank gay marriage opposition in swing states.
But at the national level, the repugicans didn’t dare touch it. Just look back at that list of wins.  Other than the House, where the repugicans cheated by redistricting their victories, Democrats – and progressives – won huge victories across the board.
I’m still digesting this in an effort to figure out what the heck happened. But something did happen last night. And it was much bigger than Democrats winning.
The left, progressives, won last night, across the board.  And I’m not entirely sure why.  Especially when you consider how much money the repugicans spent, from Sheldon Adelson to the Koch Brothers to Mr. “I was born in a socialist country.”
They all lost. The tea party lost.  Wingnuts lost. Tax cuts lost. Gay-bashing lost. Repealing Obamacare lost.
Ronald Reagan finally died last night.  It’s been almost 25 years since Ronald Reagan left office.  It’s been nearly ten years since he died.  Enough already.  He’s gone.  It’s over.  The voters are no longer falling for the knee-jerk repugican electoral panacea of tax cuts, intolerance, and war.  That might have worked in the 1980s, but the 80s are over, the Soviets are gone, the gays are here to stay, and it’s time for the repugican party to just disband and disappear.
Posted by nacktman at 11:00 PM No comments:

The Reality of Denial

As television networks began declaring that President Barack Obama had won re-election, the most captivating televised drama Tuesday evening played out on Faux News, where repugican strategist Karl Rove refused to believe the race between Obama and Mitt Romney was over.

"I think this is premature," said Rove, a former senior adviser to the shrub and architect of the shrub's successful theft the White House.
"We know that Karl has a rooting interest," Faux host Chris Wallace replied.

More than a rooting interest: Rove was the most prolific fundraiser for repugican causes during the 2012 election cycle.
With the assistance of a few powerful repugican friends, Rove helped to secure an estimated $300 million for repugican candidates, hoping to help turn the White House over to Romney and control of the U.S. Senate to repugicans.
In a $6 billion campaign, Rove's ability to part wealthy repugicans from their money made the political operative - who co-founded the American Crossroads "Super PAC" - a force in the party's effort to take down Obama.
Democratic groups raised millions of dollars based on appeals that focused on the threat Rove and the Crossroads groups posed to Democrats.

As it turned out, Obama held the White House and in nine of the 10 Senate races where Rove's groups spent the most money, the Democratic candidate won.
On Wednesday, repugicans' discontent was evident.

Conservative activist Richard Viguerie said in a statement Wednesday that "in any logical universe," Rove "would never be hired to run or consult on a national campaign again and no one would give a dime to their ineffective Super PACs, such as American Crossroads."
According to the Center for Responsive Politics, Rove's group spent more than $1 million in 10 different Senate races.

At the top of that group, Crossroads spent $11.2 million opposing Senate candidate Tim Kaine in Virginia, $7 million opposing Representative Shelley Berkley in Nevada, and $6 million in both Ohio and Wisconsin, opposing Senator Sherrod Brown and Tammy Baldwin, a member of the House of Representatives who was elected to the U.S. Senate.
Only Berkley lost on Tuesday.
For months, Rove's commercials told Montanans that their U.S. senator, Jon Tester, was "a top recipient of campaign cash from lobbyists and big banks."
Missourians were instructed to tell their Democratic senator, Claire McCaskill, "to stop spending and cut the debt."
In those races, as in Florida and Indiana, Rove's candidate lost. Only in Nevada, where Senator Dean Heller was challenged by Berkley, did Rove assist with a victory in race where he invested more than $1 million.

According to calculations made by the Sunlight Foundation, a nonpartisan group that seeks more transparency in campaign finance, Rove's outfits provided dismal returns to investors.
By the group's measure, 1 percent of the more than $100 million spent by American Crossroads achieved its desired results. Thirteen percent of the more than $70 million spent by Crossroads GPS did the same, the Sunlight Foundation said.
With Obama retaining the White House and the Democrats winning many tight Senate races, other conservative spending groups faltered, just as Rove's did.
Only 5 percent of the money spent by the U.S. Chamber of Commerce resulted in its desired effect, as measured by the Sunlight Foundation.
'THIS THING WAS WON'
In an interview with Reuters earlier this year, Rove said he wanted Crossroads to be a "permanent presence" in U.S. politics, an organization that would work alongside the repugican cabal and employ the party's top strategists while remaining an attractive home for the party's most influential donors.
In 2007, Rove resigned as the shrub's deputy chief of staff amid questions about his role in the firing of a federal prosecutor. With the shrub's legacy bruised even among his own party, the 2012 campaign provided Rove a shot at redemption.
Appearing on Fox News on Wednesday morning, Rove sifted for a few gems in the election's rubble.
He said Obama's margin of victory among young voters decreased in his second election. He said Obama is the first president to be re-elected with a smaller share of the vote than in his first election.
Saying that Romney had convinced voters he was a better leader and had a better vision than Obama, Rove offered a different spin on Romney's losing campaign.
"This thing," Rove said, "was won."

Richard Metzger at Dangerous Minds: "As a connoisseur of repugican schadenfreude, it was pretty obvious that Faux was the place to be on this election night."
Posted by nacktman at 10:46 PM No comments: