Ain't that the truth!

Don't forget to visit our sister blog!
Posted by nacktman at 9:33 PM No comments:

Posted by nacktman at 9:32 PM No comments:

The Unsolved Mystery of the Tunnels at Baiae

Among the legends of ancient Rome is that of a sibyl who lived in a cave that was the portal to the underworld. In 1958, a cave was discovered on the north shore of the Bay of Naples among the ruins of Baiæ that may have given rise to this legend. It opens to a passageway that is heated by an active volcano. Robert Paget and Keith Jones spent years removing rubble, exploring the cave's layout, mapping, and speculating on its purpose.


But only when the men went deeper into the hillside did the greatest mystery of the tunnels revealed itself. There, hidden at the bottom of a much steeper passage, and behind a second S-bend that prevented anyone approaching from seeing it until the final moment, ran an underground stream. A small “landing stage” projected out into the sulfurous waters, which ran from left to right across the tunnel and disappeared into the darkness. And the river itself was hot to the touch–in places it approached boiling point.

Conditions at this low point in the tunnel complex certainly were stygian. The temperature had risen to 120 degrees Fahrenheit; the air stank of sulfur. It was a relief to force a way across the stream and up a steep ascending passage on the other side, which eventually opened into an antechamber, oriented this time to the helical sunset, that Paget dubbed the “hidden sanctuary.” From there, more hidden staircases ascended to the surface to emerge behind the ruins of water tanks that had fed the spas at the ancient temple complex.

Could anyone be blamed for believing this underground complex to be the gates of hell? Read more about it at Past Imperfect.
Posted by nacktman at 9:32 PM No comments:

You can argue all night about who deserved and didn't deserve the Nobel Peace Prize for just about any year. But if you restrict the debate to science prizes, you'll find research that turned out to do more harm than good, experiments and conclusions that were just plain wrong, and scientists who turned out to be bad news all around. Take the case of Johannes Andreas Grib Fibiger, who won the 1926 Nobel Prize for Physiology or Medicine.


In 1907, this Danish scientist found that he could induce abnormal cell growth in rats by feeding them cockroaches that were infected with a species of worm he called Spiroptera neoplastica. Fibiger concluded that the worms caused cancer. To appreciate how significant the discovery seemed at the time, it’s important to understand that many doctors were furiously hunting a single cause of cancer. Some thought the disease was programmed into the body in embryonic cells. Others believed inanimate external factors triggered uncontrolled cell division. (English physician Percivall Pott observed in the 18th century that chimney sweeps were shockingly likely to suffer scrotal cancer.) The infectious theory was also quite popular, and its adherents pushed hard for recognition of Fibiger’s breakthrough. He received 16 Nobel Prize nominations beginning in 1922.

Did he deserve the Nobel? Well, hey, did you ever hear that worms cause cancer? Read his story and those of several other prize winners at Slate.
Posted by nacktman at 9:31 PM No comments:

This is How a Drop of Water Freezes

The photos above show how a drop of water freezes on a cold surface: by forming a sharp point at the top:


Researchers at the University of Twente, in the Netherlands, placed water droplets on a plate chilled to -20 degrees Celsius and captured images as a freezing front traveled up the droplet.
The photos are published in the American Institute of Physics' (AIP) journal Physics of Fluids. The approximately 4-millimeter diameter droplets took about 20 seconds to freeze. During the final stage of freezing, the ice drop developed a pointy tip, as can be seen in Figure 1d. The effect, which is not observed for most other liquids, arises because water expands as it freezes. The vertical expansion of the ice, in combination with the confining effect of surface tension on the spherical cap of remaining liquid, leads to the point formation.

But that's not all! After the water has frozen, the sharp tip of the ice attracts water vapors in the air and grows a "tree" of ice crystals!

More
Posted by nacktman at 9:31 PM No comments:

1500 people turned out in Makuhari for the 30th Japan Scottish Highland Games. Events included throwing a weight over a bar, tossing a hammer and a heavier version of modern shot-put, as well as tossing the caber. 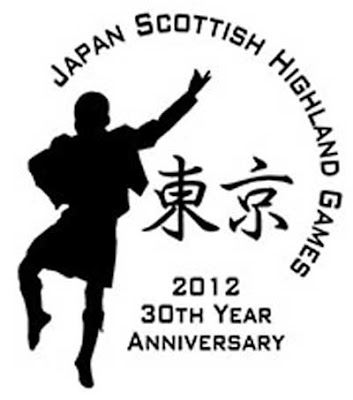 Charles Bentley-Foster, the chairman of the Tokyo St Andrew Society, explained how the event came about. "The Japanese love to take on other cultures and they're very keen. Especially between Japan and Scotland there is a very warm tie, and it has been for many years since the end of the Second World War."

One of those taking part, Satoshi Inoue, explains his love of Scotland began 20 years ago at university. "It all started when I found a set of bagpipes at a fleamarket. But they turned out to be fakes , so I decided to do it properly and I ended up here in the band," he said.

First-time competitor Tomoyuki Yoda admits he got some funny looks while training.' saying: "We have to practice (tossing the caber) under a bridge so people are pretty surprised. They look down and shout 'what on earth are you doing?'"
Posted by nacktman at 9:30 PM No comments: 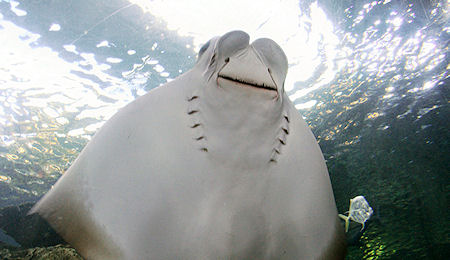 They can't help it, they just love life. 16 Incredibly Happy Stingrays.
Posted by nacktman at 9:28 PM No comments:

A south Wales couple cancelled their honeymoon and used the money to pay for cancer treatment for their pet dog instead. Newlyweds Clare and Ceri Morgan, of Swansea, were due to fly to Las Vegas when they discovered their five-year-old American bulldog Teeto had cancer.
They said they were told by vets that the dog would need an operation and chemotherapy costing more than £7,500. "Teeto had to come first," said Mr Morgan, 36. 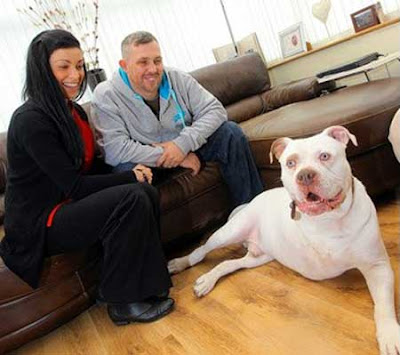 Mr Morgan said the couple had been looking forward to going away but that Teeto was "such a special dog". "We had no hesitation, we had to use the money for his vets bills," he said. "We told the vet that it didn't matter about the money, just do whatever it takes to make him better," said Mrs Morgan, 26.

"We can go on honeymoon again when we've saved up but a dog is for life and we want Teeto around for a lot longer." Teeto had his right leg amputated and underwent a course of chemotherapy to fight the cancer in his right shoulder. "He's a very big dog but he is managing very well, and the vets are all quite shocked at how well he is managing," added Mrs Morgan.
Posted by nacktman at 9:27 PM No comments:

Posted by nacktman at 9:27 PM No comments: